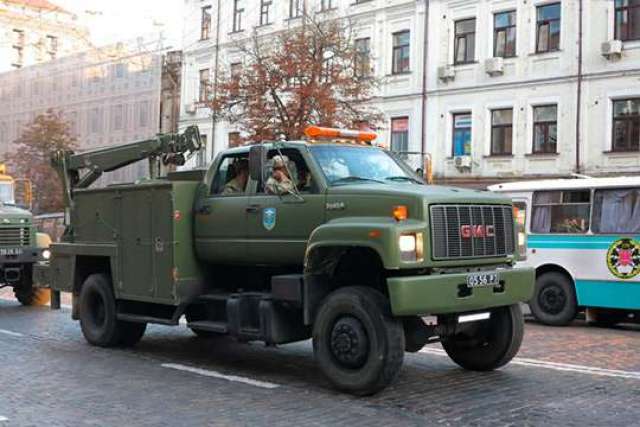 In service with the Ukrainian army, more recently, the American rescue vehicles GMC TopKick, equipped with a special crane, are made.

The GMC TopKick medium-tonnage truck with 4x4 all-wheel drive and a double-row cab appeared in 1980. It belongs to trucks of the 7th class. Its production continued until 2009. He had several options, including a bus and a pickup.

In the ranks of the APU is TopKick second generation, produced in 1990-2009. The range of its engines includes two petrol units (7.4 l and 8.1 l) and two diesel engines (6.6 l and 7.2 l). It is not known what kind of engines the trucks supplied by the Ukrainian army are equipped with.

The GMC TopKick rescue and rescue unit has a special body superstructure and a hydraulic crane with a lifting capacity of up to 3 tons. Those. This truck is designed for motorized rifle units. With tanks, he, alas, can not cope. But to raise a small armored car to replace the wheel with it is possible. Also, it is possible to load light vehicles onto a tow truck.


More in this category: « Ukrainian military received Fords to replace UAZ and GAZ Special equipment of the Armed Forces of Ukraine: MTU-20 tank bridge structure »
back to top