On the basis of KrAZ presented a new combat vehicle 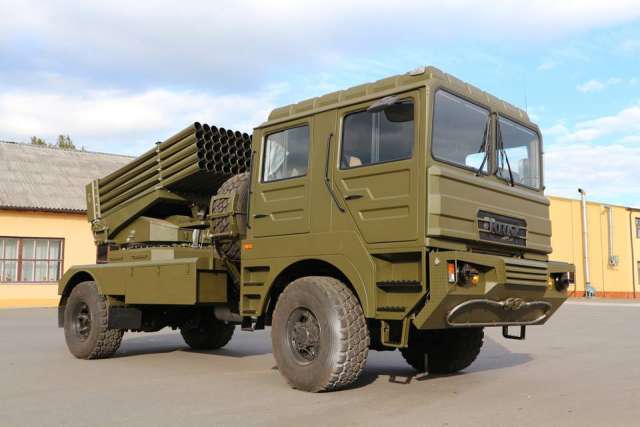 BM-21 UM Berest - a new combat vehicle based on KrAZ. It will replace standing in service with the Armed Forces of Ukraine BM-21 Grad.

The Shepetovskiy Repair Plant, GP, carried out a deep modernization of the 122-mm multiple rocket launcher system, and Ukrainian KrAZ had chosen a new promising generation with a cabin over the engine as the base Ukroboronprom. The new combat special car debuted at the exhibition “Arms and Security”, which completed its work last week in Kiev. He attracted the attention of not only the military, but journalists and ordinary visitors to the exhibition.

By production of this jet system only the Ukrainian accessories are used. The main feature is a digital fire control system that allows the crew to carry out preparations for firing, in particular, a topographic and geodetic binding, without leaving the cabin. Another feature of the new MLRS is the increase in salvo capacity up to 50 missiles, instead of 40 in Grad. High power allows you to guaranteed to destroy the enemy and quickly distribute fire between various targets.

Thanks to the new digital technologies that integrate Berest into the information exchange system on the battlefield, the MLRS calculation in real time receives the exact coordinates of the enemy, which in the processed form comes from UAVs, counter-battery radar, and other surveillance systems. Such integration at times increases the accuracy and efficiency of firing.

The all-wheel drive KrAZ-5401NE (4x4) chassis, on which Berest is installed, is one of the recent developments of AvtoKrAZ PJSC of a promising bonded direction. It is equipped with a double-row 4-door cabin, which allows you to conveniently accommodate the crew and all the necessary fire control equipment. The carrying capacity of the KrAZ-5401NE chassis is 9 tons.

A wide-profile tire with a centralized booster system allows you to operate special products installed on this chassis, not only on roads with different pavement, but also in conditions of complete off-road conditions. Two fuel tanks of 165 liters each provide all-terrain vehicle movement without refueling up to 600 km. The car is able to reach speeds of more than 90 km / h, besides, it is quite maneuverable, thanks to the bonded layout, and can easily be used in the urban cycle.


More in this category: « NPO Praktika presented new models of armored vehicles Ukraine began to produce BTR-4 from domestic steel »
back to top