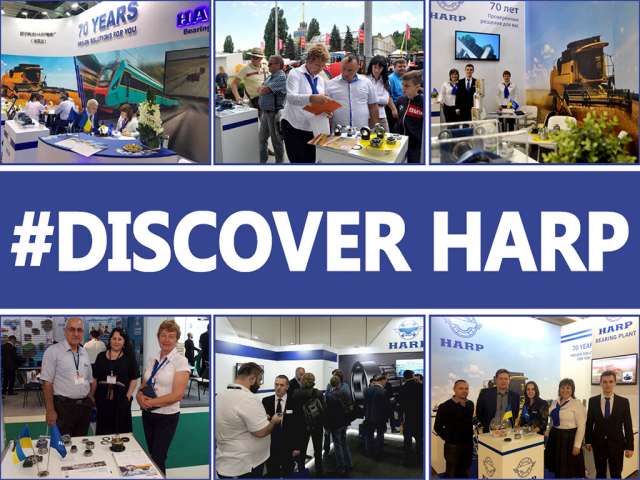 At one time, HARP products were supplied to more than 40 countries of the world. After the collapse of the Soviet Union, the plant for some time lost contact with many markets. The course for deep modernization of production, taken by him in the 2000s, allowed HARP not only to restore, but also to increase the production and engineering potential, the plant annually develops and produces more than 100 modifications of bearings and components of world-class quality.

The purpose of the tour “Discover HARP” is to demonstrate the capabilities and competencies of HARP for the global agrarian community, allowing foreign markets to rediscover the Kharkov Bearing Plant and appreciate the high level of its development and production.

In addition, following the results of participation in international exhibitions, HARP products attracted the attention of numerous visitors from Croatia, Greece, Denmark, Hungary, Romania, Germany and other countries. Production of the Kharkov plant is in demand in Bulgaria, the Czech Republic and Poland. HARP confidently got on its feet in the Baltic States - JSC IGNERA company extended its exclusive distribution contract for the second year, introducing HARP products in Lithuania and Latvia. There are plans to enter the markets of Armenia, Georgia, Tajikistan, Turkey, as well as return to the markets of Argentina and Brazil, where HARP previously supplied products, but after the introduction of state regulation instruments for foreign trade, the delivery process became very complicated, and protective duties in these countries actually squeezed out bearings with of the market.

Gaining momentum in sales, both in Ukraine and on the world market, bearings with new modern designs of high-tight seals X-SHIELD, which provide 100% tightness and protection. In addition, in 2018 there is a growing demand for HARP common industrial bearings - compared with the previous year, the need and, accordingly, the production volumes of the Kharkov plant increased by 50%.

HARP always strives to be closer to its consumer. And for this purpose conducts open webinars and excursions to the enterprise. An industrial production tour took place in July, and since that time about 100 people have visited the plant: representatives of dealer companies, trading organizations, machine-building enterprises, IT specialists, who learned more about HARP as a powerful modern enterprise with a glorious 70-year-old history and saw how the plant operates and develops.

Published in Equipment
Tagged under


More in this category: “AutoKrAZ” to Participate at Specialized Exhibition SIA-2019 »
back to top