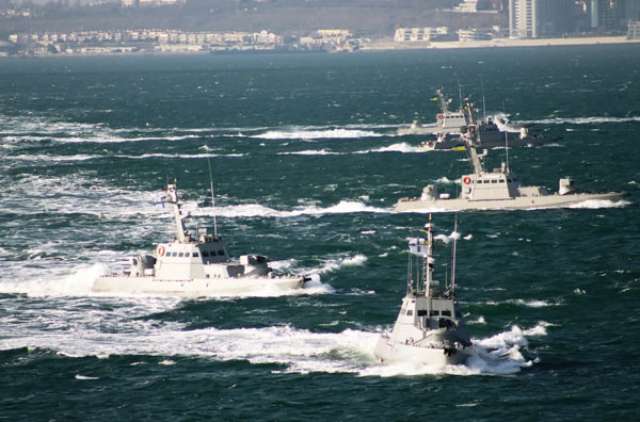 According to most military experts, Russia has actually opened another front of aggression against our state - the sea. It is no coincidence that the waters of the Azov and Black Seas are selected, since the invaders have a numerical superiority in the ship's warehouse, in the arsenal, and so on. Their goal today is to complete the blockade of ports at Azov, thus challenging economic impacts on the Ukrainian economy, creating prerequisites for social tensions on port infrastructure and in the state as a whole. There is every reason to believe that in parallel the Kremlin will implement its aggressive plans and the Black Sea. It is likely that Russian ships will block sea shipping routes, which, according to the plan of the invaders, necessarily cause restrictions on the operation of the main Black Sea ports - Odessa, the South and the Black Sea, and in the future - their stop. It should be recalled that almost 30% of revenues to the state budget are made through sea freight. Russia conducts targeted aggressive actions against Ukraine in order to completely block the development of our country as a naval state and take control of certain Black Sea areas.

Therefore, now, in addition to strengthening the existing shipbuilding, the Navy of Ukraine urgently needs to create a unified state integrated information system for the coverage of surface and underwater conditions in the Black Sea and the Sea of ​​Azov and in the basins of the Dnieper and the Danube.

What is it and why should it? The work of this system will primarily involve continuous monitoring of surface and underwater conditions in the naval operational areas of responsibility, timely detection of threats and the adoption of appropriate management decisions in violation of the territorial integrity of Ukraine.

According to Deputy Chief of Staff of the Navy Command of the Armed Forces of Ukraine on Euro-Atlantic integration of Captain 1 rank Andriy Ryzhenko, the United States will help our country create this system. The US side will provide not only adequate financial support, but also practical practical recommendations for its early implementation and further effective application.

It will operate a number of stationary and mobile radar-based coastal stations, unmanned aerial vehicles and aircraft for surface and airborne targets, and hydro-acoustic stations for stationary or shipborne landing for coverage of current underwater conditions, anti-submarine surveillance and detection of enemy sabotage forces. A so-called Information reception center will be created. According to the plan, it is there that should focus on all surface, underwater and airborne objects. The range of work should cover the territorial waters of the state and necessarily the exclusive maritime (economic) zone of Ukraine. Ideally, representatives of the Navy of the Armed Forces of Ukraine, the State Border Guard Service of Ukraine and the Ministry of Infrastructure of Ukraine, who will exchange information online will work together in a single national system of coverage of the marine environment.

Ambassador of Ukraine to the USA Valery Chaly:

"After the Russian attack on Ukrainian ships near the Kerch Strait, Ukraine hopes to assist the United States and other union countries in strengthening the National Navy. We expect the US leadership to take a very tough stand. We continue to count on military support and I think it will continue. When we received anti-tank missile systems, the level of bombardment immediately dropped. That is why we plan to expand the potential of our Navy and we are now discussing it with the United States and other states. "

For example, in the countries of NATO, the secured digital system of linking the marine situation "Link" successfully operates, the technical capabilities of which and the geography of application reach all parts of the World Ocean. That is, for example, the American or French ships, which are located in different parts of the Atlantic Ocean, receive all the necessary information in real-time. This is very convenient in terms of lighting conditions. Sailors collect data and analyze them. In addition, the "Link" capabilities allow you to clearly target destinations at sea and precise coordinates for destroying targets.

"It looks like the Command of the Navy wants to introduce us," says Captain 1 rank Andriy Ryzhenko. - In technical terms, newly built Ukrainian boats of their own project and in the future, and other ships that will replenish the naval composition of the fleet, will be ready for use in the domestic marine monitoring system. Our sailors will use a real "picture". One of the benefits of this system will be its security, that is, the enemy will not be able to crack the software.

One of the key roles in the national integrated information monitoring system for the marine environment will be the sub-system of underwater lighting that will be structurally included therein.

Today in Ukraine new hydroacoustic devices and stations are being developed that are capable of effectively monitoring the underwater conditions of potentially dangerous directions and detect enemy sabotage and reconnaissance forces. Recently, some promising samples were presented at the International Specialized Exhibition "Weapons and Security 2018".

Hydroacoustic means and stations can underwater surveillance of the coastal areas of the territorial sea, water areas of naval bases and ports, parking of merchant ships and ships in raids, areas of extraction of minerals, routes of ships and vessels, which will enable to identify in a timely manner a particular threat.

First of all, it is a question of a modern hydroacoustic counteraction to sabotage forces and means of the "Tronka", which was developed by the personnel of the State Enterprise "Kiev Research Institute of Hydraulic Devices". This mobile station is easily placed in the water area of ​​the port or immersed next to the ship carrying the firewall at sea. The station automatically detects and accompanies underwater objects. For example, a combat swimmer without equipment or with a closed aqualung, the station "Tronka" can splay at a distance of more than 500 m. With an open-water aqualung - at a distance of about 900 m. And to detect saboteurs, which were taken on superficial craft, maybe for 1000 meters.

Another useful development was presented at the exhibition - the positional hydro-acoustic station "Olympus 3K". The geography of its use differs significantly from the "Tronka". The station is quite capable of operating in the so-called average operational area of ​​responsibility for the underwater lighting system, which is practically 20-35 miles from the entrance to the harbor, bays, bases, etc. Mobile deployable, captures noise from the work of submarine screws even at depths up to 200 meters and so on. Can clearly identify the underwater goals and classify them, transmits information online.